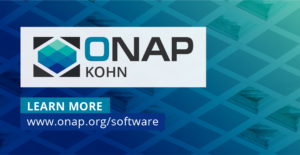 We are excited to announce the 11th release of the ONAP project, named Kohn, in honor of the late Dan Kohn, computing pioneer and Linux Foundation executive.

Just as 2022 comes to a close, the community wrapped up the work required to deliver an improved software package that includes many new features and enhancements to existing ones. With contributions coming from a wide variety of Network Operators, Equipment Vendors, and System Integrators, ONAP continues to be the leading collaboration platform for innovation in network management and orchestration.

“We know how  important security is for ONAP consumers,” said Paweł Pawlak, Product manager at F5 and ONAP TSC and SECCOM chair “That is why we support software supply chain security with ONAP SBOMs (Software Bill of Material), normalize security event logging, and reduce the number of open source vulnerabilities in the code base by 60%. And the ONAP community continues simplifying security by starting the transition to a service mesh architecture.”

In addition to these core features, ONAP Kohn includes robust KPI computation for use in Intent Based E2E Network Slicing, improved configuration query and change notifications in the Configuration Persistency Service (CPS), improved slice analysis in the Control loop automation, and continued modernization of the Policy framework including Service Mesh integration and native Kafka messaging.

In terms of E2E Network Slicing, ONAP Kohn offers enhancements in the Slice Analysis to support real-time intent listening, KPI Computation and display in the Usecase UI, and enhancements for Intent-based Cloud Leased Line and Transport Slicing with DCAE SDK.

Finally, ONAP Kohn extends O-RAN alignment and integration, with continued maturing of A1-Policy controller functions, support for the updated RESTCONF spec in the A1 Adapter, 3GPP dependency updates, and better alignment with O-RAN in the 5G SON use case.

Overall, ONAP Kohn offers a range of exciting new features and improvements that will help drive the continued evolution of our software and its ability to support the evolving needs of the telecommunications industry. We look forward to seeing the impact of these updates in the field, and we will continue to work hard to deliver even more exciting new developments in the future.

The ONAP community is already busy working on the next release, codenamed “London”, which is expected to include new functionality for 5G SON, a richer set of features for E2E network slicing, hardening of management interfaces and more.