The focus on application infrastructure automation sets EMCO apart from most other orchestrators. EMCO has a broad vision for end-to-end orchestration that includes not only the deployment of complex workloads in a wide range of scenarios, but also automation of the infrastructure needed by such workloads ranging from networking and service mesh to application security. The EMCO 22.06 release takes several steps forward in the supported range of deployment scenarios and in application security.

EMCO 22.06 builds on security and flexibility:

And, EMCO 22.06 broadens the range of deployment scenarios it can handle: 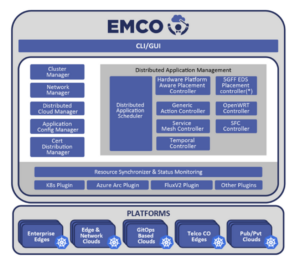 This release reinforces the position of EMCO as a leading open source orchestrator that goes well beyond the basics by orchestrating the infrastructure needs of modern cloud-native applications, including security, in addition to catering to the complex deployment scenarios that they require.

The EMCO community invites you to try out the latest release and join us in shaping the future of cloud-native and multi-cloud orchestration. To learn more about EMCO visit Getting Started with EMCO.