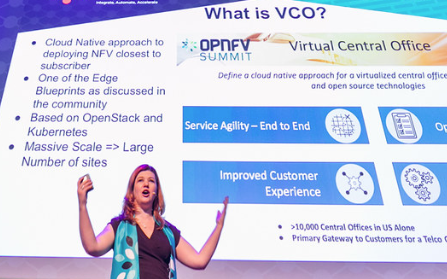 It was nearly one year ago that the OPNFV community unveiled the second iteration of the Virtual Central Office (VCO 2.0) proof of concept in Amsterdam at Open Networking Summit Europe, and it’s been over two years since debuting the first iteration (VCO 1.0) in Beijing as part of OPNFV Summit. What we’re seeing in the industry is that virtualizing services in the central office remains one of the most compelling use cases for global operators looking to transform networks,  reduce costs, develop new services, and lay the foundation for 5G.

We are thrilled to announce that the next version of the demo — a fully containerized, end-to-end, global, 5G network built on open infrastructure using k8s and other open source technologies — will be shown live on the keynote stage at KubeCon + CloudNativeCon San Diego, Nov 18-21! Learn more here.

What we’ve seen over the last couple years — in parallel to the virtualization of networks using technologies like NFV and SDN that leverage virtual network functions (VNFs)– is that, cloud computing (private, public, and hybrid clouds), containers, and cloud native applications are now moving into global telecommunication networks as the next major area of adoption. For the foreseeable future, we predict virtualized networks will be onboarding, managing, deploying, and scaling a combination of VNFs and cloud-native network functions (CNFs) across global networks in a hybrid approach.

But how can operators leverage cloud native applications, on top of their existing infrastructure, while planning for a 5G future? Since Amsterdam last year, a demo team made up of 30+ volunteers from over a dozen companies, and several open source communities have been developing a cloud native approach to network services and connecting a global network of physical  labs in Sophia- Antipolis (France), Montreal (Canada) and San Diego, with cloud-based networks for a demo that will showcase both how the telecom industry is using cloud native software to build out their next-gen networks, and also show solution providers what’s possible in this exciting new space.

Our Keynote has been scheduled for Wednesday, November 20th, from 9:59 – 10:24 am PT. Make sure to add it to your conference schedule and we hope to see you in San Diego!